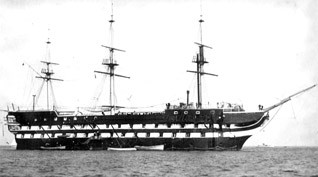 The story of HMS Conway began in the 1850s when new merchant shipping laws required merchant navy officers to be better educated and more professionally trained. This led to a growth in training school ships and the first of these was HMS Conway in 1859 moored at Rock Ferry on the Mersey. Over the years three different ships were used as the Conway, but the last and longest serving was originally the 1839 built HMS Nile.

During 1941 Liverpool and its docks suffered devastating air raids and the ship came close to being sunk by bombs. It was decided to relocate HMS Conway to the more peaceful surroundings of the Menai Strait. On May 21st 1941, HMS Conway began her first journey for 65 years. Twenty-four hours later she was moored at Glyn Garth to the west of Bangor pier. Apparently, cadets were sometimes mistaken by local people for the youths, many of whom had behaviour problems, that had been trainees on the training ship, Clio, the former occupant of the berth.

The ship’s next journey came 8 years later. The demand for officer cadets had risen so the Conway’s Captain Goddard needed to find an onshore site to help accommodate extra cadets. The site of Plas Newydd was chosen because it had space for playing fields, buildings for classrooms and a small dock. On 14th April 1949 the ship was moved, with the aid of two tugs, along the Strait and through the Swellies to Plas Newydd. The ships mast passed within 3 feet of the underside of the suspension bridge and the ship’s bottom came dangerously close to the seabed on occasions.

Four years later in 1953, the ship needed to be refitted in Birkenhead. Local pilots (Richard Jones and his son John) advised the commanding officer, Captain Eric Hewitt, RNR, who agreed that three tugs were needed but they were overruled by Conway‘s management committee, who insisted upon only two as in 1949.

As the ship approached the suspension bridge an unexpected strong current meant the ship was making very little progress so the rear tug was moved to the front in an effort to gain extra power. This left the rear uncontrolled and minutes later in very turbulent waters HMS Conway ran aground on flat rocks (the “Platters”) near the bridge. As the tide went down the ship’s back broke, leaving her wrecked on the edge of the Strait.

The reasons for the grounding have been much discussed. According to David H. Thomas, a former cadet, the adverse conditions in the Menai Straits were exacerbated by an abnormal surge caused by bad weather in the Irish Sea but suggests that the late departure from Plas Newydd was the root cause of the tragedy.

The wreck remained until 1956, when Caernarfon Harbour Board began work on removing it. However, during this work the ship caught fire and was burnt down to water level. The ship’s remains can still be seen at very low tide.

The school remained ashore at Plas Newydd for almost 20 years. While a hutted camp was built tents borrowed from the army were used as dormitories. The school finally closed in 1974 when funding was withdrawn. During its final time in Plas Newydd both Ian Duncan-Smith and Sir Clive Woodward studied at HMS Conway.

For more information click onto the HMS Conway site. The history page on that site includes a fascinating report on the actual enquiry into the accidental loss of the ship.