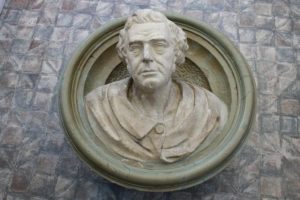 Menai Heritage, the independent charity that runs the popular Bridges Exhibition in Menai Bridge, is pleased to announce that a newly acquired bust of Robert Stephenson, the designer of the Britannia Bridge, has returned to the museum after being repaired and conserved.

The bust had originally been in the Railway Institute building in Bangor. The Institute was built in 1898 by the London and North Western Railway company, as a centre for rail workers to socialise, exercise and read. The bust was high on the wall overlooking the reading room but had been hidden for many years by a false ceiling. Just before demolition of the building in 2016 it was rescued by members of the Bangor Railway Club and Menai Heritage volunteers. The club has donated it to Menai Heritage.

The bust and its frame had accumulated many years of dirt and some damage. Menai Heritage received a grant from The Association of Independent Museums, through their Pilgrim Trust scheme, to fund cleaning and repair by Elliott Ryder Conservation.

Robert Stephenson, son of “the Father of Railways” George Stephenson, was a famous and accomplished engineer in his own right. Born in 1803, he developed the most advanced steam engine of its day, The Rocket, when only 25 years old. He went on to be involved in building one third of the railways in Britain, and designed numerous bridges, including the revolutionary tubular Britannia Bridge over the Menai Strait, which opened in 1850.

The bust is now safely back in the Menai Heritage museum and on temporary display. The museum will be reopening to the public on 14 July and can be visited at the Thomas Telford Centre, Menai Bridge (across from Waitrose) during the normal opening hours, Wednesdays and Thursdays, 10am-4pm. Entrance fee £3; children under 16 free. Timed entrance tickets can be purchased at http://menai_heritage.eventbrite.com.