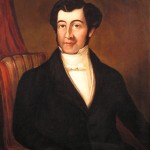 About 1772 the lame son of a Stainborough (near Barnsley in Yorkshire) estate worker packed his bag and set off to walk to London. Unable to do farm work he turned his attention to his mechanical interests. After a few years in London he began a small business of his own and then found time for his developing a series in ingenious inventions.

pumping machines and the hydraulic press – several inventions assisted in the brewing trade, for example a Beer Pump which raised the beer from the cask to the sale point in the bar

his greatest invention was his Hydraulic Press (1795) which was used on on a number of occasions by famous engineers including the hoisting of the Tubes of the Britannia Bridge (raising 1,144 tons)

civil engineering – Bramah was always involved with the manufacturing side of his inventions. In 1812 he patented an ambitious scheme to lay water pipes through London to carry pressurised water for extinguishing fires. He also designed the new waterworks in Norwich (1790-93) with great success

… by rare genius and eminent perseverance, he advanced himself to considerable eminence as an engineer and machinist and matures several inventions of the greatest public utility…