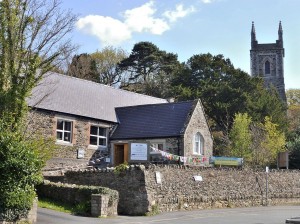 The Thomas Telford Centre, home of the Menai Heritage offices and exhibition, is a former schoolhouse that was refurbished in 2007. In the early 1850s, as the congregation of Porthaethwy/Menai Bridge outgrew the tiny church on Church Island, the well-known Bangor architect Henry Kennedy drew up plans for a new church along with an associated school, yard and schoolmaster’s house, with the church in a commanding position overlooking the entrance to the Menai Bridge. Land was donated by the Marquess of Anglesey, as was funding, and the school opened in 1854.

Initially the school was a simple rectangular building with a small porch on the front. In 1878 an extension was added perpendicular to the back wall to accommodate an infant’s school. A new cloakroom was added in 1896 and the front porch extended in 1909.

The school was part of the National School Movement, which sought to provide elementary education in association with the Established Church, as opposed to the British Schools founded by non-conformists. Initially the syllabus would mainly focus on the Bible and the catechism, but into the 20th century the study of mathematics, literature and geography were added.

The school could accommodate 200 pupils, but rarely was full, particularly after a new British School was built in 1865 in Dale Street. A new Council School built on the corner of the Holyhead and Pentraeth Roads in 1913 further depleted the student numbers. An inspection report in 1921 cast doubt on the suitability of the building for a modern school, although the teaching was considered very good. In 1923, when the headmastership of the Council School was vacant, it was decided to merge the two schools, with the National School’s headmaster George Senogles becoming head of the Council School. On 29 March 1923 the students and teachers parcelled up all their belongings, marched down the road to the new school, then gave three cheers for the old school and three more for the new one.

After 1923 plans were put forward for other uses for the building, including as a police court house, but the original conveyance of the land from the Marquess of Anglesey stipulated that it was to be used for educational purposes. It therefore continued to be used as a Sunday School and parish hall for St. Mary’s church.

Founded in 1997, the Menai Bridge Community Heritage Trust (also known as Menai Heritage) seeks to preserve the historical and architectural heritage of Menai Bridge for the community. These aims were advanced by their purchase of the old National School in 2007, with the generous help of Menter Môn, the National Assembly, the Cemlyn Jones Trust, the Institution of Civil Engineers (Wales) and by Friends of the Trust. It was renamed after the builder of the nearby Menai Suspension Bridge, Thomas Telford.

The Centre has been fully refurbished and now has a new roof and central heating, and has all the requirements for public use, with new toilets and kitchen, a storeroom and room for meetings, lectures and events.Since its purchase, it has become a busy centre for community activities and group and school workshops. The Menai Heritage Exhibition is also housed in this building and is open to the public, telling the story of the building of the two iconic bridges over the Strait and the people involved.

We are currently developing a permanent home for the Exhibition at Princes Pier on the waterfront in Menai Bridge, for the enjoyment of local people and to encourage visitors back to the town of Menai Bridge.